I could walk the entire day, stop for a few minutes in between, munch some food, and still be upright – ready to dash the next store. By the looks of it I really enjoyed shopping. From cat print shirts to neatly pressed coats, the energy slowly dwindled away. I don’t dash into store after store anymore. It’s not that shopping isn’t fun, but perhaps I’ve become more efficient, and my energy – divided.

There were days when I could buy oversized clothes – hey I was still growing! These days I walk out empty handed if they don’t fit me.

Do you kind of feel a little awkward when the beautiful piece of cloth fits so well on the mannequin but looks awful on you? Deception! Do you feel a small part of you get angry when the salesperson gives you a size hoping it’d fit you (they’re 100% sure), because by the looks of it – it should, but doesn’t? Do you begin to wonder if its just you, or perhaps it’s everyone else too? What kinds of clothes are they making?

And then sometimes you find one that fits just well, after having a heap of discarded ones on the floor. Does it then feel like an achievement?

I almost never find my shoe size. It’s almost always sold out. They say there’s just one pair for one size in one style. Why don’t they make more of it? Or it is just the thing they say to make up for the lack of it? Can’t say.

Do you sometimes worry about having to bargain? After a full day’s work, at the edge of Decision Fatigue, does it seem like a huge task? And so do you head into the fixed price store instead? Ah! at least everyone who buys there pays the same price.

A prose on shopping. So many things inside the mind of a supposed adult out on shopping. Anyways, I still manage to get some cat print items.

Week 11 of Growing Up – a series about growing up, every Saturday. How’s the digital drawing I tried? Did you shop this week? Let me know in the comments.

Refresh your memory with Chapter One, Two and Three.

It had already been six months since the first time Meera came to realize that she was a witch. She missed home dearly, especially her sister. Hogwarts was sealed with magic so there was no way she could use muggle devises like smart phones. Thanks to her friends Neal and Benny, Meera seemed to be catching up with her classes. Professor Zuck and Rufus had also been giving extra lessons to help her.

An owl flew over to Meera’s table during breakfast.

‘It’s got a letter for you,’ Benny said casually.

‘I haven’t received a single letter since coming here,’ Meera exclaimed. Was it shock or happiness, no one could tell.

‘Then may be its time you do,’ added Neal, putting some tomatoes over his plate.

She detached the letter from the owl’s feet and opened it. It was from Mayna. 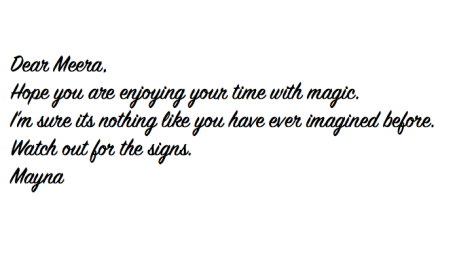 By the time Meera turned up, Benny was running.

‘Bye Meera, late for my extra class!’ she said waving.

Meera did not like how Mayna had behaved with her. She had not uttered a single word about magic, despite being a witch herself. Even when Zuck arrived to get Meera, Mayna refused to say anything that would clear her mind. And now she added the confusion by asking Meera to look out for signs.

Meera stood up and headed towards her dormitory. Mayna’s words troubled her. What was coming ahead? Could she avoid it? She was completely lost in her own world until, she knocked over someone.

‘Oh sorry!’ she said. Meera flushed. It was Li.

Meera had previously been able to thank Li for saving her from the rotten eggs, thanks to Benny’s constant encouragement. But this was not expected. Li’s bag was on the floor with his books spread out. Meera immediately picked them up and handed it over.

Meera had already moved a few steps ahead when Li called out.

She did not know what to do. What did he want anyway?

‘Ah yes,’ she said turning back.

‘Ahh…school’s looking to form a Quidditch team. Professor Zuck told me that you’re quite good at flying. How about you give it a try?’

Meera stood there, frozen for a few seconds.

‘I’ll think about it then.’

‘If you’d like to try out, be there at the Quidditch ground tomorrow at 4.’

She nodded and walked out as quickly as she could. Why was Li asking her to play Quidditch, why? Is this a sign? She dissed the thought out of her head. She decided that Mayna was just playing games as always, even when she was not close by.

Meera put the letter under her pillow and carried her books. She could see the sky through one of the little windows beside her bed. The sky was clearer today. May be should could fly, she thought for a moment. After all she had managed to the very first time without much of a problem.

She hurried back to her class where she met Benny.

‘So, Li asked you to try out for the Quidditch team?’ she asked with a glare in her eyes.

How did she know, Meera thought.

‘Don’t be surprised,’ Benny added. ‘Anything that Li does is bound to become news, especially when it involves you. So are you going to go?’

END_OF_DOCUMENT_TOKEN_TO_BE_REPLACED

Im sure we’ve all seen ‘The Dress’ and its colours that has been surfacing around the internet for a few days now. A friend had posted the photograph in our class group and suddenly everyone started commenting on it. From green and black to white and golden to everything in between. Everybody was claiming their colour to be correct and I was checking if someone else could see the same colours as I could. When I saw a few friends comment with the same view as mine, I felt relieved. Oh! How we need to belong somewhere and nobody wants to be the odd one out! Even if we were right, we need somewhere to belong and even when we’re wrong! Phew!

This phenomenon, already defined by science is a challenge to the common notion of ‘seeing is believing’. How hard is it to believe that what I am seeing is not what is real? How hard is it to accept that there is something completely different than what I can see? How easy is it to accept that someone else sees something completely different, regardless of the facts? Well, it is really hard. Our minds have been so formed that we cannot deny what we have seen is not real or that there could be someone who can see something entirely different out of the same space.

At first I felt weird when people said they could see a colour I didnt have a slight hint existed on the dress, but when science cleared up, I understood a little. Its hard to believe that our eyes can be tricky. But it reveals a fact of the human mind, of our temperaments and how we need to go and see beyond the normal horizon. Then shall we be able to fully understand one another. Imagine if science hadnt intervened to clear the mess, the debate would go on, just because what they see is not what we see, what we see is not what they see. To be right is supreme, but to comprehend divine.

Welcome to The Wordcastle! This little blog is my effort to write and learn along the way. I am some time a writer and some time a business graduate who doesn't seem to get over children's literature.

In a video by Russell Brand, he shares that when we think we want something and then we do not get it, the event is an opportunity to understand that we do not know what is right for us. Maybe its true.
Nature never leaves us, till we decide to go against her. Like a friend with unwavering dedication, she stands beside us, helps us get through trials and tribulations, heartaches and losses.
I was thinking about words and what they do. They create sparks, and they also simplify the sparks. As readers we might have to agree to imply more than we see.
Breathe with the wind.
Art Quotes for a dash of inspiration.
This World Art Day, I pray for the courage to keep making things, to make art for purpose, direction, and happiness.